Nw Missouri Beebusters met April 8 at 7 p.m. with a few people arriving later. Many things concerning bees were talked about, with Betty Grace also announcing she should have wildflowers for sale starting June 1. Betty also gave out contact information for a very nice color catalog for the Missouri Wildflowers Nursery:

They offer their full color catalog free if contacted. It makes a wonderful resource for identifying flowers.

In other news, Keith has managed to successfully step down from the presidential role into a more behind the scenes one, and we are fortunate enough that Ed Wohlford is willing to step in and lead the club. Keith has had three wonderful years as president and we are sorry to see him go but look forward to supporting Ed in his new position.

There will be a meeting on April 8th at 7 :00 pm at the county building in Maryville.
Hope to see you there.
At that time I will be resigning as president and you can decide from there where and when you want to have meeting.
I just feel it is time for someone else to be president of the club and get some new ideals, the longer I am involved with beekeeping I find that I really do not know how to keep honey bees alive. I have read a lot of books, magazines, took class's and still cannot seem to get a handle on how to keep from losing a third of my bees every year.
I have enjoyed it and I really have learned a lot from all of you.
Happy Beekeeping
Keith
Posted by NWMO Bee Busters at 8:50 AM No comments:

Hello Everyone we have some exciting things coming up for March.

First our next meeting is March 12th at 7:00 pm. Instead of meeting at the technical school we are meeting at the Nodaway County Building. The address is 303 North Market Street Maryville, MO.

Next we have the class that the Missouri Extension is sponsoring. The class will be mostly taught by the Midwestern Beekeepers Association but we will be helping out. This class is March 21st from 8:30 am - 5:00 pm. This class will be at the Technical School. Here is the link with more info about the class.

http://www.moveggrowers.org/beekeeping-workshop/maryville-mo-beekeeping
Posted by NWMO Bee Busters at 6:52 AM No comments:

Don't forget tonight we have a meeting at 7:00 pm at the Northwest Technical School. They will be discussing the upcoming class for Advanced Beekeepers on February 8th at the Technical school. Please join us!!
Posted by NWMO Bee Busters at 8:47 AM No comments:

The meeting began at 7:00 pm with 12 people in attendance and Keith Dougan presiding with all officers present Keith began by introducing Josh Hurlbert, a representative from Congressman Sam Graves's office, and we had a discussion about the current situation with bees. One of the questions Dorene had originally brought up was the declaration of the tall sweet clover as an invasive species when it is one of the best plants for bees. Hurlbert had already done some initial investigation into that and listened to other concerns. He talked with us for about a half hour.

After the discussion we moved ahead and set the date of February 6,2014, at 7:00 pm at the Votech center as our next meeting.We then began planning ahead for the Beekeeping 101 class offered through the college on January 11 for that following Saturday. Meeting adjourned at 8:30 pm.

I am sending this to everyone the club has an address for. PLEASE BE AWARE THAT THERE IS A SCHEDULING CHANGE. MEETING DATES ARE NO LONGER LOCKED INTO THE SECOND MONDAY OF THE MONTH. Next meeting is scheduled for JANUARY 8th, 2014 the Wednesday before our introduction to beekeeping class on Saturday the 11th. Also be aware that Congressmen Sam Graves has been invited to attend this meeting though I have not heard anything from him accepting or rejecting the invitation.

Keith Dougan opened the meeting by giving a presentation on a couple of candy bards. We moved along quickly to our major event, electing new officers. Kent Brown moved that we retain the same officers but Keith said he is having trouble fitting it into his schedule on the dates as it is scheduled now. He asked if we could change the date. Dorene Claybaker definitely agreed. Byron Miller also brought up the idea of moving leadership around in the group so that it did not continuously rest on Keith. The other officers thought this was a good idea.

It was settled that the next meeting would be at 7:00 p.m. on January 8 at the Votech building in Maryville. That is a Wednesday. Meeting dates may float throughout the week now, including weekends.

Byron posed a question on water usage in your sugar water, better to use distilled water or hard water? Different members weighed in with different ideas. Byron also brought up the need for an amplifier for
meetings and that it really would have helped us at the American Royal show. Tom Kenny agreed to look into that and get some pricing for the next meeting.

All events are at the Vo-Tech building in Maryville, MO

Posted by NWMO Bee Busters at 7:25 AM No comments:

The November Meeting is cancelled. Our next meeting will be on December 2nd at 7 pm at the Northwest Technical School.
Posted by NWMO Bee Busters at 8:32 AM No comments:

This year Keith, Jerry, and Erin went out to Nodaway Lake north of Maryville, MO to speak with 4th grade students from the county about bees. We had an observation hive and several display items. I think that all of the kids and teachers enjoyed the program. 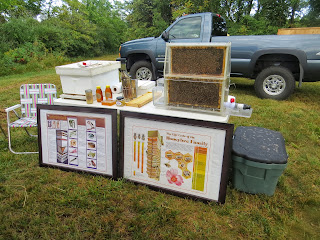 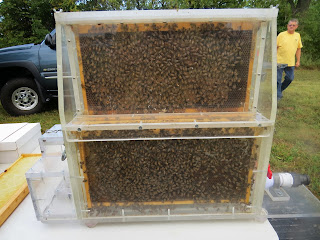 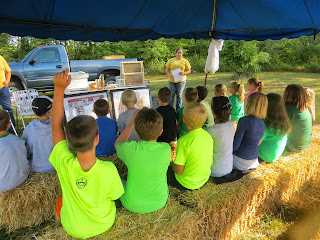 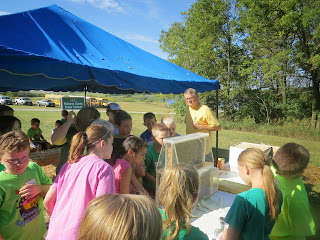 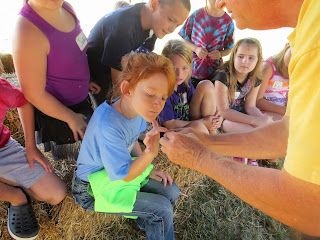 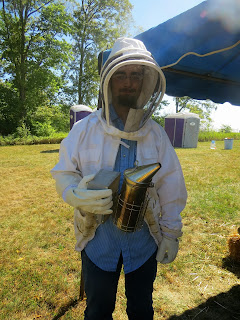 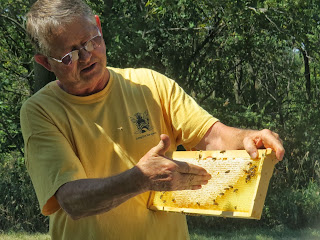 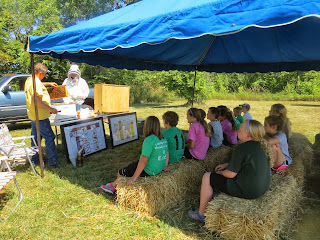 Posted by NWMO Bee Busters at 7:15 PM No comments:

Upcoming meeting of the Northwest Missouri Beebusters will be June 10
at the Vo-Tech building in Maryville at 7:00 p.m.

One of the topics we need to discuss is the stand at the Nodaway
County Fair on July 18, 19, 20th. Bee thinking of plans for a banner
that needs to be made. How best to represent the Northwest Missouri
Beebusters and what do we want the stand to show?? Volunteers will
also be needed.

Sincerely hope to see you Monday night at the Vo-Tech building!!!

Today Byron Miller and I (Erin Mullins) went to Horace Mann Lab School in Maryville and talked with the kids about bees and beekeeping. One of the moms baked biscuits so that the kids could try the honey and I think most liked it. It was lots of fun and I think the kids and teachers enjoyed it a lot.
Here are some of the pictures from today. 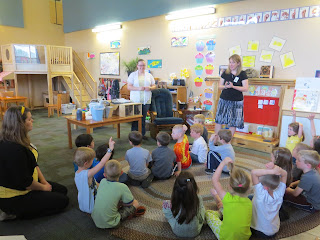 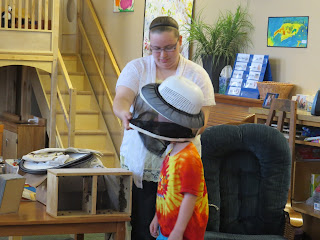 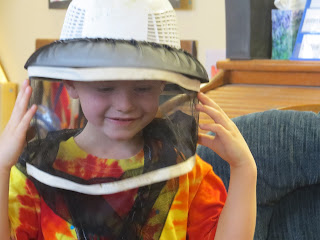 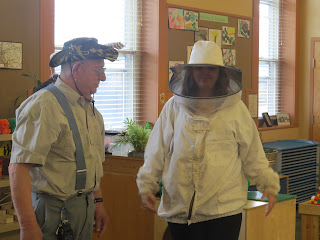 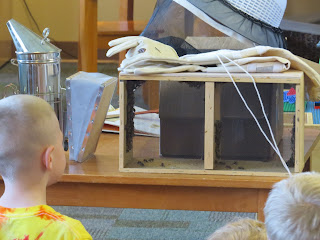 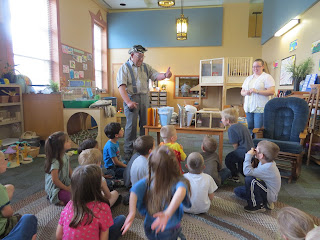 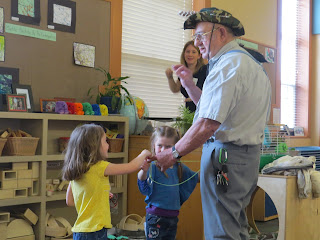 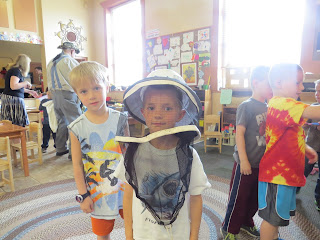 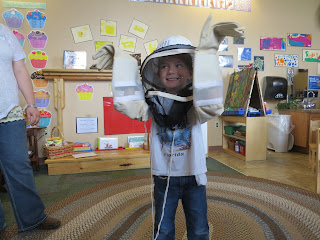 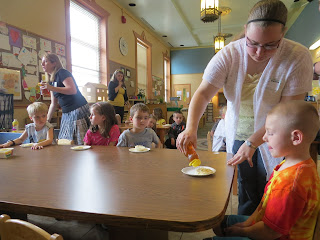 NWMO Bee Busters
We are an informal beekeeping organization that meets on the second Monday of every month. Most of our meetings consist of talking about current beekeeping subjects. We were officially founded in 2011 and continue to grow. If you are interested in joining our club or have any questions you can email us at beebusters2012@gmail.com or simply come to a meeting there are no dues required. If you have bees or are interested in getting bees this is the perfect club for you. We look forward to seeing or hearing from you!!